The March to Queenston Heights

Posted by m&vhurley on October 28, 2018
Posted in: Photography. Leave a comment

It was a cold and dreary October morning, when some hardened re-enactors chose to commemorate the march which took place October 13, 1812 from Fort George to Queenston Heights.  This march is reminiscent of times gone by.

This march is the brainchild of Ryan Clark of the 49th Grenadiers.  He decided to do this last year but was unable to garner support from any of his Re-enacting friends as it was short notice.  This year was much better, with the added support of Niagara Parks, and his hope is that for the 210th Anniversary, there may be a full contingent of forces.

The men that were garrisoned at Fort George marched their way to Queenston Heights to be ready for the battle that would take place. History reminds us that war was not an easy task. 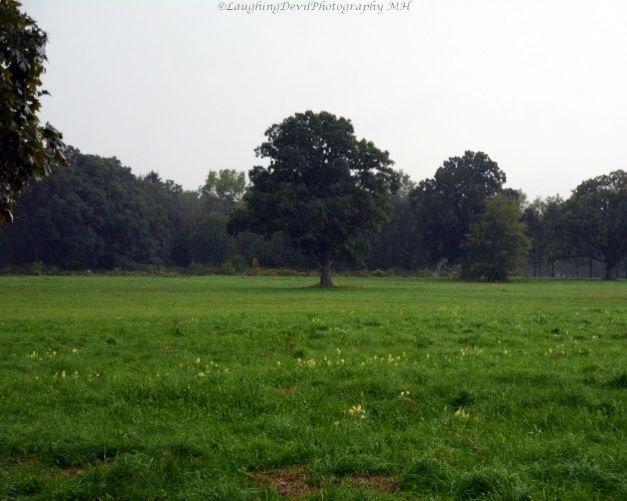 These re-enactors, while remembering those gone before, are setting out to remind people that war was not fun.  This was real.  Real men died.  Real families were ripped apart.  Each person taking part had their own reason for being there, whether it be to help a friend or for the physical activity or just because it was a neat thing to do.  However, every  person that was there, was doing so to remember the struggles that the area went through to become what it is now. 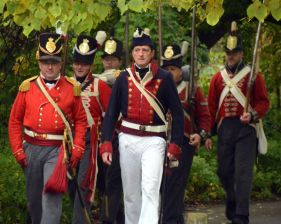 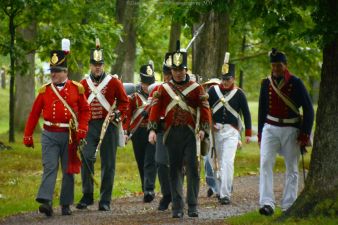 It started out as a rainy Saturday morning, but did end up drying up a little bit.  There were 7 men and 1 lady who made their way along the path travelled so long ago.  The men were a great mix of British and an officer as well as an American who travelled across the border to show his support for his fellow re-enactors.  The one lonely lady certainly was well protected. 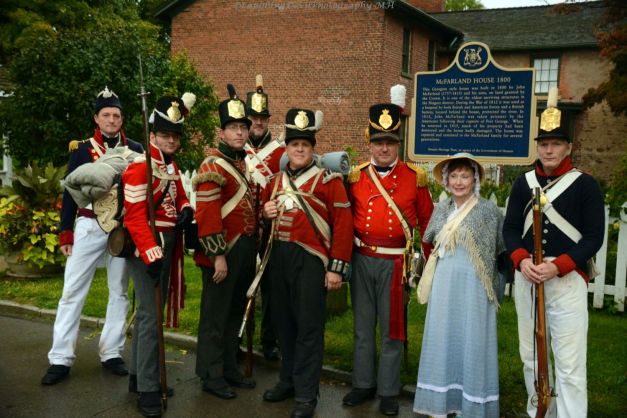 The march stopped at McFarland House whose importance during the war is definitely significant.  This home is one of the few structures still standing in the Region that was a pivotal part of the War of 1812.  This home was used both by the British and the Americans as a hospital.  The home continued to stay in the McFarland family for many generations until relatively recently. 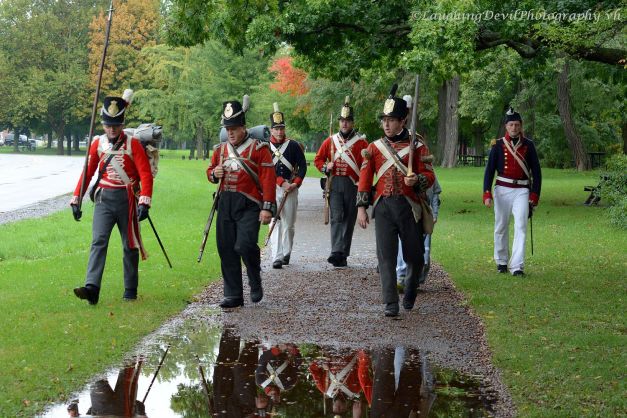 The march then continued on its way travelling the path along the Niagara Parkway.  The group stopped a couple of times along the way for water and a bit of sustenance before continuing on.  They were also stopped by people both in cars and walking, who were inquiring as to “what are you guys doing?”.  Thus giving them a chance to explain the history that they so passionately portray.   They then headed into the Town of Queenston with a stop at the Cenotaph to pay their respects to those who were lost in the First and Second World Wars. 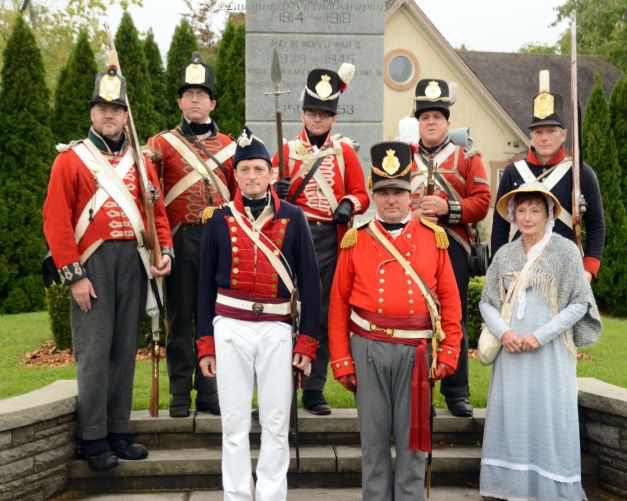 Continuing on into and through Queenston with a quick stop at the Homestead of Laura Secord.  She is indeed a heroine of the War of 1812 and everyone should take the time to know her story.  Chocolate is not what she is known for in historical circles.

Then the climb began.  They walked up past Mackenzie Printery and up toward what is now the Brock Monument.  Through the dense brush that those before them would have climbed, without the luxury of the wooden staircases that are there today.  Then on to the plateau at Queenston Heights. 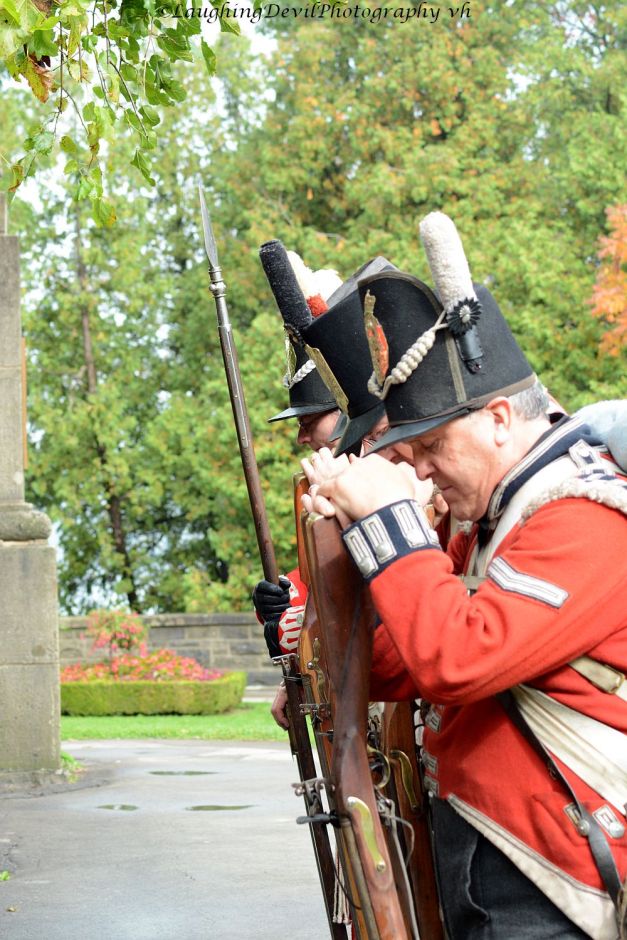 There the men stood for a moment of silence in honour of those who had fallen in the Battle of Queenston Heights in the War of 1812.   They can only to imagine what it would have been like to do that march 200 years ago in the mud and the rain, roads washed out and bringing with them artillery and wagons.  What strength of character those fighting men had so many years ago.  They also took time to reflect on what it had taken out of them to do this march.

The re-enactors who did this march, also have a strength of character, but it is very different.  Their homes and their families are not being threatened by enemy forces.  Their livelihood is not fighting for their country.  They are Remembering those who went before them, forging their way to make this place better for those to come after. 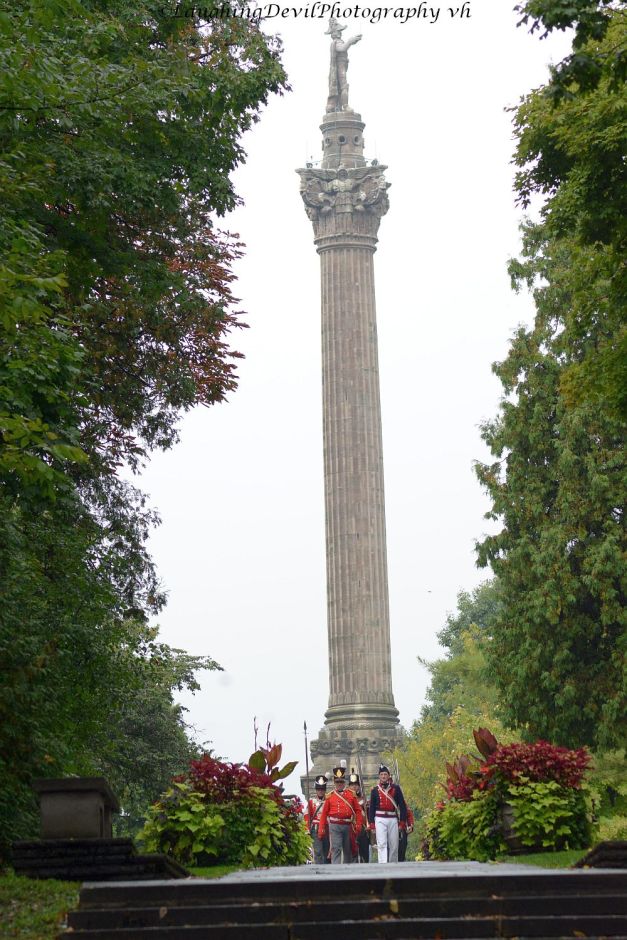 Then it was time to do the return march back to Fort George.  By this time the sun was making an appearance every once in a while, the humidity was bearable and everyone was ready to get back to the Fort.  However, having covered the distance of at least 11 km it was indeed a gentler pace on the way back.  Everyone was in great spirits after having completed the march to the Monument. 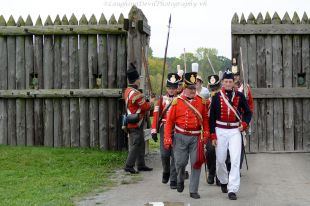 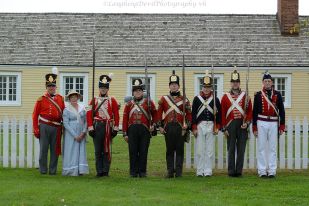 Upon arriving at Fort George, the re-enactors took some time for a group photo for posterity and also took time to congratulate both Ryan and everyone for completing the round trip.  The units represented were the 49th Grenadiers, the 49th Centre, the 41st Royal Scots Grenadiers and the Royal Artillery.

It was indeed an honour and a privilege to photograph this monumental event.  This history is too important to forget.

“Those who fail to learn from history are condemned to repeat it.”  – George Santayana